In the footsteps of

Follow in the footsteps of Dic Penderyn. Was he a hero,villain or victim of the 1831 Merthyr Rising? You decide!

Our trail through Merthyr Tydfil takes us to places wherethe leaders of the rising would have met to formulate their plans and to the locations of several flashpoints duringthe rising which led ultimately to the massacre of some26 workers. Dic Penderyn himself was hanged for the alleged stabbing of a British soldier, but the Merthyr Rising lives on through the symbolism of the red flag, first flownas an emblem of workers’ protest during the events of 1831.

Although we cannot be sure exactly where, it was in places such as this Grade II listed former coaching inn that the participants in the Merthyr Rising would have met to formulate their plans. Previous decades were marked by simmering unrest, punctuated by occasional outbreaks of violence such as the riots and strikes of 1800 and 1816. At the heart of this discontent was variable wages, rising food prices and widespread debt. Conflict between the Ironmasters (owners of Merthyr’s huge ironworks) and workers was ongoing. By the spring of 1831, alongside demands for higher wages and better living conditions, the movement for the extension of the franchise had also found a Welsh base. Amidst rising tension, protesters would have gathered in the large back rooms of inns such as this to discuss their grievances and demands.

Now make your way along Swan Street and follow the River Taff northwards, crossing to the west bank in front of the fire station.

Through March and April 1831, the situation in Merthyr Tydfil deteriorated. One of the ironmasters, William Crawshay, had announced wage cuts for his workers and the voting reform crisis was in full swing.

This public house was a well-known meeting place for the 1831 radicals amidst this simmering unrest. Built in 1795, it had spacious rooms inside as well as space for outdoor meetings. Unfortunately for the protesters, there is evidence that a government spy infiltrated their meetings and therefore the ironmasters knew a great deal of the workers’ plans in 1831.

The scene of one of the early flashpoints of the Merthyr Rising, the Court of Requests was where records of the workers’ debts were kept. Its bailiffs ruthlessly pursued those debtors, confiscating their belongings.

The final days of May had seen a mass meeting of some 2000 workers at the Waun above Dowlais, protesting against the stalled Reform Bill and against the Court of Requests. It may have been on this occasion that a cloth was dipped in calf blood and raised for the first time as a symbol of workers’ protest.

In the early days of June, insurrection followed including the storming of the Court of Requests, which you see in front of you. The crowd released the property which had been seized and held there, restoring it to its former owners, whilst the debt records were systematically destroyed by burning or thrown into the nearby River Taff

Here you can you can see the original route the workers would have taken in those first days of June, marching from the Penydarren, Hirwaun and Cyfarthfa Ironworks down to the town via Pontmorlais.

If you have time to explore a bit further, drop into Canolfan Soar, a former chapel now hosting Merthyr Tydfil’s Welsh language and culture centre.

The Castle Inn, now a grassed area at the north end of Penderyn Square, was the focal point for the main confrontations of the Merthyr Rising over several days.

It was here that the ironmasters met a delegation of workers, including Dic Penderyn, to discuss their grievances. The ironmasters delayed, whilst requesting that more troops be sent to Merthyr, but the patience of the workers ran out. When a large crowd of protesters tried to break into the inn, they were met by rapid fire from troops of the Argyll and Sutherland Highlanders, resulting in at least 26 killed and probably treble that number injured. Elsewhere, the Swansea yeomanry was disarmed and sent packing but with the subsequent arrival of extra soldiers, the insurrection began to collapse.

In the following days, the women dragged the bodies of their loved ones away to bury them in secret graves on various mountainsides.

The iron heart in the corner of Penderyn Square is the work of artist David Appleyard. It is based on a motif from Watkin George’s iron bridge which would have crossed the River Taff at the time of the Merthyr Rising, although sadly the bridge is no longer there. Appleyard wanted to reflect the town’s iron heritage but also designed it as a nod to Dic Penderyn himself saying:

“The iron heart from the iron bridge provides the perfect metaphor for Merthyr. It has a direct link to the days of the iron masters, it was originally cast in Cyfarthfa Ironworks using iron made in Merthyr Tydfil, it has a personal connection to Dic Penderyn and it has existed and become weathered throughout the last 200 years of Merthyr’s history. It is still here.”

Don’t miss Welsh poet Gillian Clarke’s two works about the Merthyr Rising at the foot of the heart. The Welsh poem is in the form of an englyn, a traditional and complex Welsh verse form dating back to the 9th century.

The naming of Y Dic Penderyn public house is symbolic of the importance of the Merthyr Rising in working class protest.

When the building was purchased by JD Wetherspoon, it was originally named after Josiah John Guest, owner of the Dowlais Iron Company and Merthyr’s first MP. Following a campaign by the Dic Penderyn Society, it was renamed more suitably for its historic location, no longer celebrating a Dowlais capitalist but rather a folklore hero, Dic Penderyn.

So, what was Dic Penderyn’s fate after the defeat of the rising? A plaque on the library’s exterior, funded by the Church in Wales and the local Trades Council, commemorates the events of 1831 and notes that he was hanged at Cardiff Gaol on August 13th 1831. Though the facts are disputed, he was alleged to have stabbed a soldier, Donald Black of the Highland Regiment, in the thigh during the conflict outside the Castle Inn.

In 2016, a petition protesting his innocence and seeking a posthumous pardon was signed by some 11 000 people. It cited the confession made some 40 years after the rising by another man, Ianto Parker, to the crime together with the admission by a key witness, James Abbott, that he had lied at the trial.

It should also be noted that Dic Penderyn’s trial was held in English. He was a Welsh speaker

How should we assess Dic Penderyn? Was he a hero, a villain, a victim or, as is recorded on this plaque, a martyr of the Welsh working class? You decide. 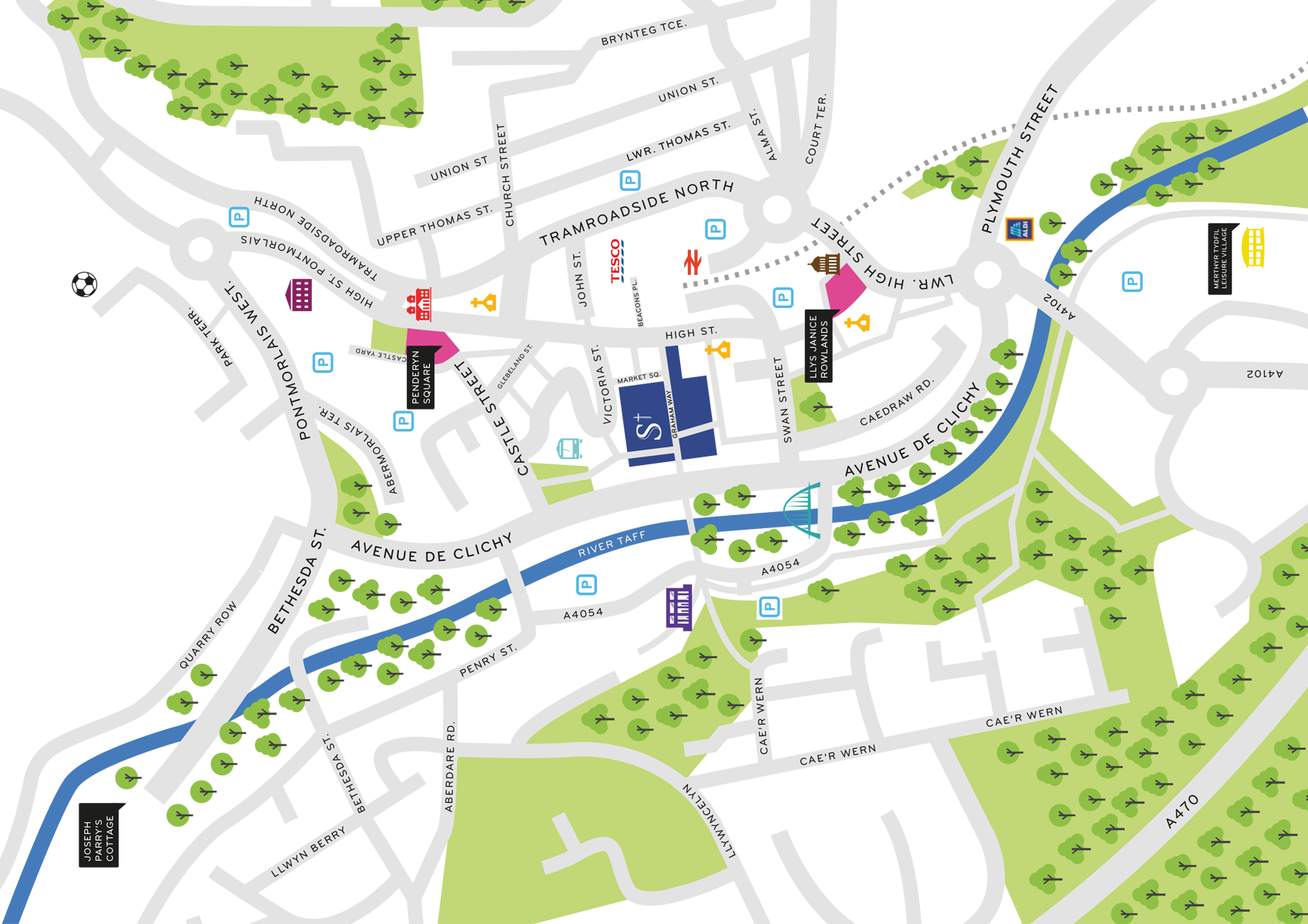